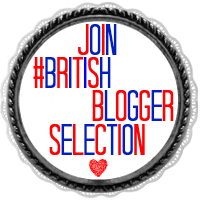 Today I got involved in a little something called the #BritishBloggerSelection, created by Ellie at little vintage camera. In essence, British themed bloggers will post based around a theme every week. This weeks theme is Halloween.

Personally, I'm really interested to get involved so I can become more a part of the blogging community! It's a bit terrifying being a new blog, standing in a sea of hundreds upon thousands of blogs, so it'll be nice to get involved. I also really like the idea of themes, this week has been quite to get posts up because I just started my new job and it's running me into the ground, I'm sure it'll be easier once I get used to it but right now it's so hard to get home, plonk myself at my laptop and think of something to post about! I'm not sure anyone particularly cares about how desperately I want sleep or the model of the business I'm now working for or their customer service expectations but that's all my head is filled with at the moment!

Anyway, if you'd like to get involved, get in touch with Ellie and let her know your blog URL, blog name and your first and last name :) You can email her at littlevintagecamera@gmail.com or comment on her blog :)
Posted by Emmy at 16:17 No comments:

October was an...interesting month, to say the least! Little bit of a roundup, now I actually have things more or less in order. I can be found on the following sites:

Just a very, very quick post to show off. This photo was taken right after it was done, so it was a little bloody but I am so, so happy. The moment you know you're coming away with a new addition to your body that you're utterly in love with is an amazing feeling. It was done by Roberto at Forevermore in Glasgow and I could not be happier. Roberto was a delight, great banter and he really helped me relax and as you can clearly see, he's an amazing artist.
Posted by Emmy at 16:41 8 comments: I've always been a major fan of tattoos, there's just something about the permanence of a beautiful piece of art on your skin forever. Of course, that's not always the case for everyone but you can't argue that many, many people are covered in stunningly gorgeous pieces.

I already have one tattoo - a memorial tattoo I got on a whim this summer. It means a lot to me, but it scarred badly and that's a major shame :( But tomorrow, I have an appointment booked for a brand new tattoo. It's going to cost me an absolute fortune (more than my rent!) but at the end of the day, I don't mind paying out for something that will hopefully be on me forever. I've spent more on piercings and I barely wear any of mine!

The design is all sorted - an old school tall ship (for my love of nautical history) on my thigh - but I just can't wait. Hopefully I'll have some photos of it on Monday, I just can't wait to be able to show it off, really!
Posted by Emmy at 13:30 8 comments: In all honesty, this is probably the first time I've worn makeup in about two weeks. I made a major dietary switch from pretty much exclusively drinking Pepsi Max to almost exclusively drinking water and my skin has been looking wonderful for it. It's been so clear and even that I haven't really wanted to jinx it by slathering on makeup. However, I'm meant to be going out for lunch today with a friend and I'm running on about an hour and a half sleep. Desperate times call for desperate measures, but I'm going to be crossing my fingers that my skin stays lovely.

This is really my usual look - the one I put on while running on autopilot, I don't think, I just do. I always tend to keep my eyes simple because of my glasses, but I love a bold blush and a simple lip. I very rarely use concealer, I've never found one that actually really works for me so I just don't bother. Most of what I'm wearing crosses over with my makeup basics, really.

I suppose this is a little downhearted for how new this blog is, but even when it was just a barely there idea, I knew I wanted this blog to really be a reflection of my lifestyle. Disappointment and downheartedness, unfortunately, are part of that.

Quite recently, in the past month in fact, I lost a job I absolutely loved. It was a tough job but I loved my coworkers and it was rewarding. Unfortunately, they decided to shut our office and I was left sort of stranded - we had three weeks notice but I was terrified. I was disappointed and I was scared - I'm always one to be a little bit terrified of the future so suddenly not knowing where it was going was a huge shock to my situation.

One thing that made it worse was the fact I'm in a long distance relationship. This was an issue for two reasons - a) my job was incredibly flexible, so I could take every other weekend off no worries to visit my boyfriend and b) my boyfriend was supposed to be up here in Glasgow for three months, and I'd already arranged my work schedule to accommodate that. Not only had I lost my job, but I'd actually lost a fairly large part of the way my personal life worked.

But I managed to pick myself up. I wouldn't say I'm back on my feet, but I'm at least to my knees and then came the second blow, not directly to me this time, but it still affects me and it still brings that black cloud of worry and stress with it.

My boyfriend is in the forces and the past few months he's been working his ass off to get his career onto the track he wants. Just the other night, he found out that regardless of the work he'd put in, it wasn't going to go the way he wanted. This changes everything. He's lost the three months he thought he'd have off, and now he's going to be moving to a base that's harder for me to get to. Never mind that I now have a job where I can't just up and take off whenever I want.

For someone who hates change, who resists shock and uncertain futures, it's all a bit of a mess. Positive thinking is all well and good but it's hard. Long distance relationships are hard. Being fairly alone in a city you still barely know is hard. And now it feels like I've been kicked in the kneecaps while I'm just trying to get back in the race.

Sometimes you have to wonder what's coming next, and all you can do is cross your fingers that it's going to be okay.
- Emmy xo
Posted by Emmy at 14:40 4 comments: Hiya! I'm Emmy, I blog about beauty, my life, Glasgow and whatever else suits my fancy, really.

more about me
You can contact me at alittleyes@gmail.com